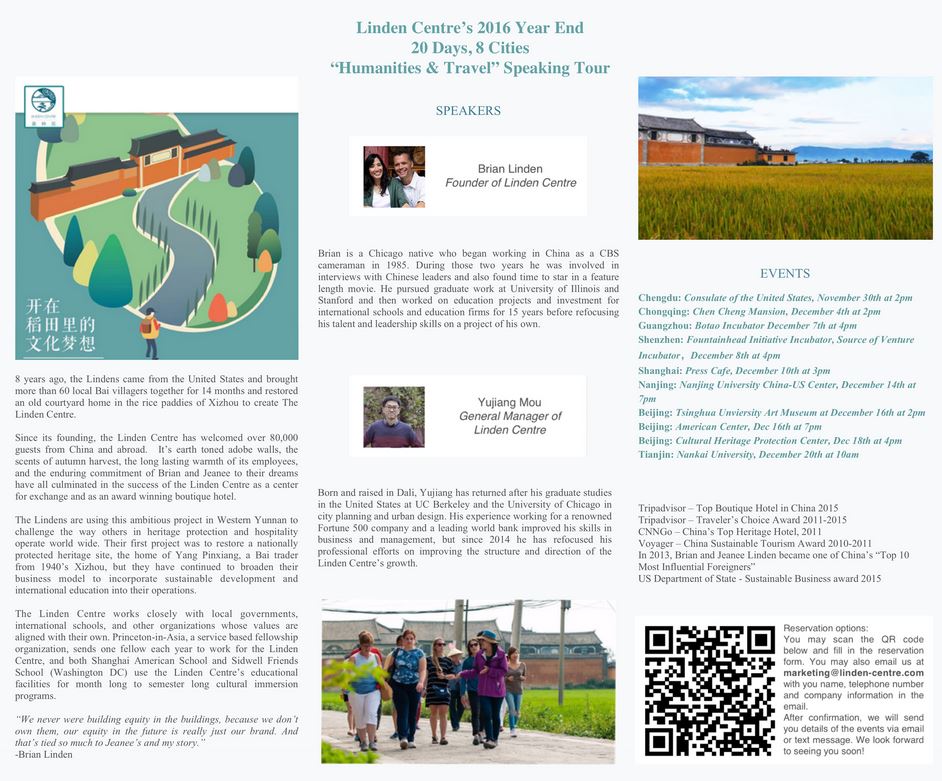 The Linden Centre’s approach to community development and preservation has garnered increasing support within Chinese government and media circles. In response to requests to share their story with business and education communities, Brian Linden and Mou Yujiang, General Manager, will deliver talks to universities, embassies, and book stores in Chengdu, Chongqing, Guangzhou, Shenzhen, Shanghai, Nanjing, Beijing, and Tianjin. The talks will focus on the Linden Centre’s innovative business model and its impact on cultural sustainability and heritage preservation in rural China.

Brian is a Chicago native who began working in China as a CBS cameraman in 1985. During those two years he was involved in interviews with Chinese leaders and also found time to star in a feature length movie. He pursued graduate work at University of Illinois and Stanford and then worked on education projects and investment for international schools and education firms for 15 years before refocusing his talent and leadership skills on a project of his own.

Born and raised in Dali, Yujiang has returned after his graduate studies in the United States at UC Berkeley and the University of Chicago in city planning and urban design. His experience working for a renowned Forgotten 500 company and a leading world bank improved his skills in business and management, but since 2014 he has refocused his professional efforts on improving the structure and direction of Linden Centre’s growth.

You may scan the QR code in the picture above and fill in the reservation form or you may also email us at marketing@linden-centre.com with your name, telephone number and company information in the email.